A tattoo with San Francisco artist Brücius in Berlin 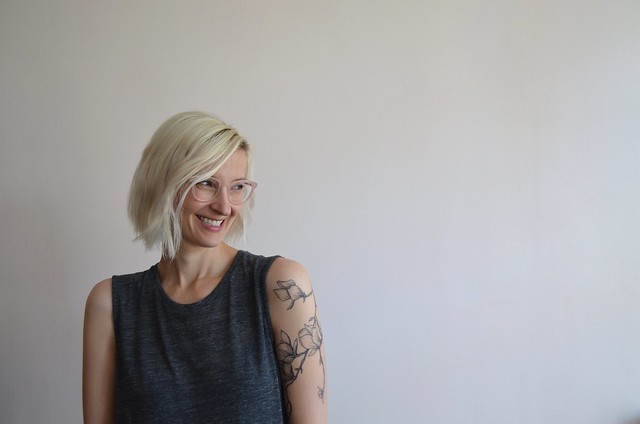 Brücius is the kind of artist that people wait for. Ten months, to be exact, is the estimated wait time for an appointment with him. His style is very specific, yet classic and timeless. It has the feel of art found in vintage textbooks and children's stories, which I was immediately drawn to because of my love of books. I had been wanting to be tattooed by him for years, and somehow, it came to fruition very, very quickly. This is how it went down:

Perusing my far-too-full Instagram feed a few days before my birthday back in September, I happened upon a photo from my very favorite tattoo artist with #Milan in the caption. Berlin being the tattoo capital that it is, I asked in the comments if he might be headed to my city while he was over here - and he was. Scrolling back, I discovered an announcement I had missed while bogged down with Bailey's cancer diagnosis and my own travel plans: A Brücius European Tour! Milan, Berlin, London and Paris. And the dates? Berlin at AKA on my birthday. Are you kidding me? It actually made me tear up a bit, so upset for having missed something so potentially huge.


Optimistic, I asked if he was booked (via Twitter, Instagram AND email, because I'm obsessive like that), and not surprisingly, he was. Perhaps because of my persistence, or my regular stalking/commenting on his IG account for quite some time, he did offer a free consult while he was in town. I stayed glued to my phone, checking email and Instagram for the next day as if my life depended on it. When he finally replied with a place he was hanging out for the afternoon, I said I'd be there in 30 minutes.

Easy to spot with his gold nose piercing, he was sitting at a corner cafe in Neukölln with a Macbook and an Orangina when I approached, with butterflies in my stomach. He immediately invited me to sit and called the waitress over for me to order something to drink. What I noticed right away was his ease and openness. So many tattoo artists, especially ones with talent and a huge following, can be, let's just be honest, cocky bastards. Brücius was the polar opposite. He was very invested in my ideas and what I was looking for, even for what began as just a free consultation. He seemed like a much younger artist, someone unburdened by his fame and not-yet-jaded by the industry. Perhaps that's a reflection of his relatively short time in the tattooing world, but his decades of experience as a visual artist leaves little room to doubt his talents.

After talking for a little bit and admitting I was uncertain the next time I would be back in San Francisco, he began thinking out loud that he might actually have time to fit me in the following day. My eyes widened at the prospect and couldn't help but sputter out: "That would be amazing, because tomorrow's my birthday!". From that moment on, we went from talking in the abstract about ideas, to pulling up images and designs online to use as reference. By the time we ended our meeting, my heart was racing with nervousness and apprehension - I had an appointment! I went from meeting my favorite artist to talk about a tattoo I might like one day, to deciding what I actually wanted permanently on my body the very next day. At one point, he even cautioned that I didn't have to do this if I wasn't ready. I nearly laughed in his face. Brücius here in Berlin, offering to tattoo me on my birthday, and I'd turn it down? Puh-lease.


All I really knew is that I wanted something beautiful. Pretty lame and vague, right? So, I'd always admired floral arm pieces because they really are timeless, but preferred something less obvious. After realizing I like the woodiness and leaves of a floral tree, rather than a plant, it really narrowed things down. I thought dogwood at first, but when I began looking up images of magnolias, I knew I had found my flower. It reminded me of climbing the magnolia tree in my neighbor's front yard when I was young and way the blossoms hung heavy on the branches until the wilted petals fell off, carpeting the ground beneath much like a blanket of fragrant snow. The dancing colors of white and pink, never completely one or the other, enchanted me. I scoured the internet for high-resolution photos of magnolia blossoms and branches, as well as a little geometric thrown in as well, to create the Pinterest board that Brücius would work from.


When I arrived at AKA on the evening of my birthday, where he was the guest artist for a few days, it was an off day and so we had the place all to ourselves. Brücius and his assistant made me feel welcome and comfortable. We started by talking through how this process would work: picking the best images that I had chosen and then creating the design on my arm from those. For hours, we edited in Photoshop, patched things together, printed them out, taped them on my arm, ripped pieces off, re-taped and reconfigured. Incredibly, all this work is done free of charge. Brücius doesn't start the clock until the needle first touches your skin. I can't express how great it felt to be part of the process, and how much it put me at ease, especially since this design was not something I had already been planning and agonizing over for months. Finally, three hours later, we were ready to started.


The design we configured was printed out on a very Jetsons-esque (boy, am I dating myself here) printer, that looked more like a bulky ruler than office equipment, with transfer paper so it could be applied to my skin. The temporary tattoo of sorts served as an outline for him to start the design on my skin. For better or worse, he began with the flowers on my inner arm and holy shit did it hurt! I have three other tattoos and while it never fails to be a sobering reminder when you first start a new one, this was far and away the most sensitive spot I've been tattooed (even more so than around my ankle bone). As he continued to work, at times firmly rotating my skin around the get the best angle, I remembered how that jarring feeling soon starts to dull and you almost get used to it. As he worked around my outer arm, I soon hardly noticed the pain... until he came back around to the inside and then it was like a hard slap to the face. That is a tough area, my friends. Very tough indeed.


Brücius originally quoted two hours for a design that was expected to be even larger and more complex than where we were heading, so after two hours came and went, I started to get a little nervous. As we continued through the next hour, I realized how we had gotten so beyond our schedule: Since he doesn't do traditional tattoos, any shading in the design were made up of fine lines or dots rather than a solid sweep of ink. We stopped a few times closer to the end to look in the mirror and from all angles to see if anything was missing. Note: once you stop and then start again, sensitivity goes way up as your body readjusts to the pain - the longer you can keep going in one sitting, the better. While we talked though a few details, like additional leaves and a higher branch on my shoulder, he continued to go back over other areas, reworking until he was happy with them. The template that was put on my skin had been washed away after he got a general outline inked, then worked the entire rest of the piece from his own artistic vision. At one point, he started talking through the detail of the branches and how he didn't want to do the striations so often seen in etching (his speciality) because he was never happy with the way it turns out. I felt a little disappointed, as I love this look, but I gave myself over and trusted his vision. Unsurprisingly, I was thrilled with the way the wood looked in the end.


Just over three hours after we started the tattoo, and six hours after we first started working on the design, I was done. My husband had come to get me nearly a hour earlier and the next clients had already been there for some time, all of us chatting together like a casual kind of tattooing party. Even with a lineup that would surely keep him there past dawn, Brücius still took the time to thoroughly go over all the post-tattoo maintenance (which creams, which creams not to use, no swimming/sun/sweating, etc.), take several photos and give me a big hug. In the end, he charged me only for the two hours he quoted, saying "happy birthday", though he had already given me perhaps the best birthday present I could have asked for.


I don't know how I got so lucky to have made this happen, but I'm so grateful. I was convinced that he conceded after I admitted it was my birthday, but Brücius claims it was simply because I showed up to meet him. Either way, he took a lot of time out of his brief stay in Berlin to make my birthday wish come true. I made rather quick decisions on the design, and yet I'm still so happy with the result. I adore the way it wraps around my arm, the bulk of the blooms around the front and inside, more for me to see, with only a small hint from the back. The painstakingly tattooed dots and lines that create the depth in his designs are clearly a labor of love and proof of his attention to detail. His light hand while tattooing - not to mention his lighter, quieter rotary tattoo machine, as opposed to the traditional coil machines associated with that loud buzzing - and awareness of his client's pain levels made the whole experience even more of a pleasure. We never did get around to adding any geometric elements to my tattoo, but that's all the more reason to plan a trip back to San Francisco for another session with Brücius... 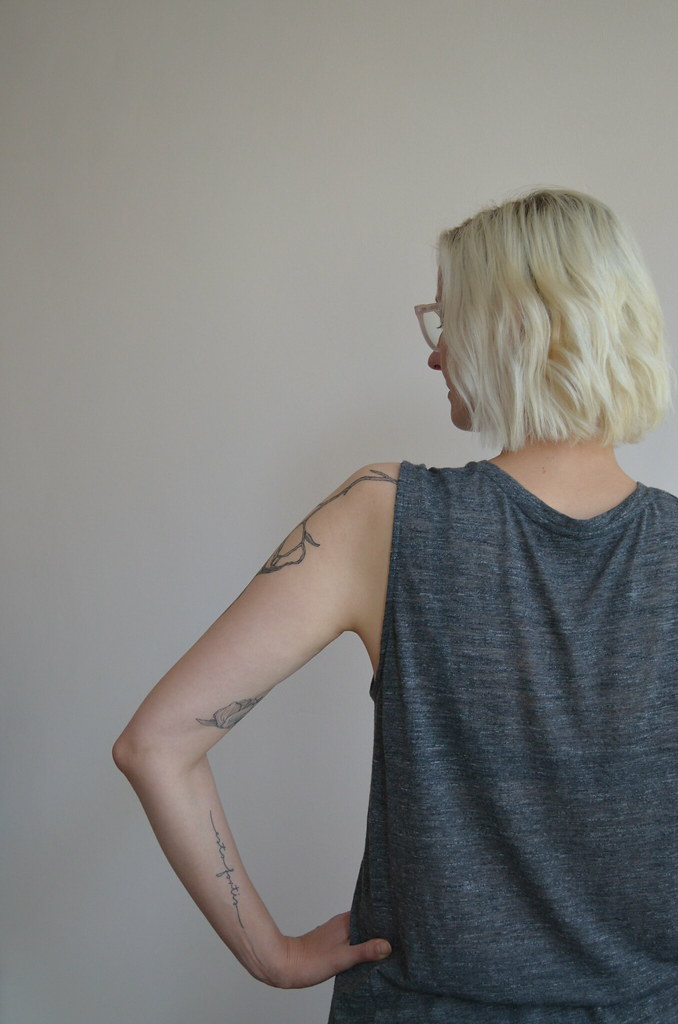 Thank you for sharing your thoughts and comments. I love hearing from you!

That said, Sole Satisfaction is a space free from hate, drama and spam. If that's all you're bringin', please take it elsewhere.